Walking the Way of St. James 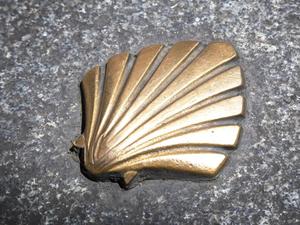 During a luncheon with “the girls,” a long time friend of mine announced that she was going to walk “the Way” or the El Camino road in Spain. Years ago I heard about the El Camino and wanted to go. I
always felt that it was an impossible pipe dream so I shelved it in the back of my mind. But now years later, a voice was tugging on my heart and calling me to go.
It was a real possibility now since I wouldn’t have to go alone. Later, fellow pilgrims told me that the road “calls” to the people who need to make the journey.
“The Way” or the Way of St. James is also called the El Camino de Santiago de Compostella . El Camino de Santiago has been used by Christian pilgrims for a thousand years. Early records show visits to the shrine of St. James that date from the ninth century. St. James Pilgrims travel from different routes to one single destination: the tomb of St. James. St. James is the patron of Spain. He was called, St. James the Elder, to distinguish him from Jesus’ brother. Who was the first Christian martyr killed by Herod of Agrippa.
There are many routes for pilgrims. One of the longest routes is over the Pyrenees, a trip that is 400 miles long ending in Santiago. The modern pilgrim must make at least a 60 mile trek from Sarria to Santiago in order to receive a certificate of accomplishment. In medieval times, a pilgrim walked to the ocean and picked up a scallop shell as evidence that he completed this pilgrimage, thereby, making the scallop shell the symbol of the pilgrim on his journey.
In my youth, I did a number of backpacking trips. So I prepared for this trip in a similar fashion. I was more concerned about my physical stamina and my equipment than my spiritual stamina. (I was secretly hoping to lose weight and get in shape on this trip.) The only spiritual preparation was from Pastor Mark Goble of CTK Lutheran Church who prepared prayers for each day of my journey. He put each prayer in a sealed envelope. Each envelope was marked with a number 1-6. I was excited to stop at midday for devotions and find out what our prayer for the day would be. Other than that I had no idea how this would be a spiritual journey for me. I mean we would be in the open air in all kinds of weather, just walking 10-12 miles a day.
My first day was very eventful. Arriving at the Madrid airport alone and not speaking any Spanish was my first challenge. I had to make my way to the train station that was to connect to another train station that would take me to Sarria and my friend. I managed to find the train and boarded for a 6 hour ride to the country. We stopped at every little hamlet and town on the route. At each stop people left until finally me and another lady were left. She came to me expressing her concern that I was not on the correct train. Where are you going? She asked in English. Sarria I replied. Oh no she said you are on the wrong train. This train doesn’t go to Sarria. With that the train stopped she got off and I was alone. Night was coming and I was terrified. Was I really six hours out of Madrid in the country with no wi-fi and not knowing a lick of Spanish? Self doubt set in and I scrambled to find my Day 1 prayer and prayed. As it turned out I was on the right train. Last stop, Sarria. As I left the train I saw my friend in
the distance waving and smiling at me.
We started our walk in Sarria. Our phones had limited access, neither she nor I spoke any Spanish but we were on our way. We walked 10 miles a day on a winding path, through medieval villages, forests, and up a mountain. We laughed, we cried, we prayed, we made deep human connections with people from other countries, we lost our material possessions for a time, and finally we arrived at the top of the hill overlooking the City of Santiago. As I stared at the beautiful city of our destination I realized 'The Way' paralleled my own spiritual life. My spiritual life with all the twists and turns, with all the doubts, with all the troubles, and life with all the joys, blessings and beauty. Now the understanding of this Psalm 16:11 will remain in my heart, "You will show me the path to life, abounding joy in your presence,
the delights at your right hand forever."
Ms. Lorene Beaudry
Early Childhood Director
Print